Marina is a character in the Silverwing series. She was banished from the Brightwing colony due to the fact she had a band. She appears in the first three books (Silverwing, Sunwing, and Firewing). Her son is Griffin and her mate is Shade.

After meeting Shade on an island after he was blown away from his colony, Marina accompanied Shade on his quest to reunite with his lost colony, whilst evading the Cannibal Bats Goth and Throbb. She slammed into Goth to rescue Shade during the thunderhead chase, and her band was ripped off of her arm by Goth. After escaping the thunderhead and defeating Goth temporarily and Throbb (who was disintegrated by a lightning striking the bands he stole from bats), she was adopted by the Silverwing colony and discussed the bands with Frieda, preparing to continue her adventure with Shade to find his lost father, Cassiel Silverwing.

After deciding to stay with Shade's colony she adventured to a fake forest, similar to the one Goth and Throbb were in. Marina also became closer to Chinook, spending time and flirting with him. She later explains to Ariel that she tortured Shade because she was mad at him, and tried to make him jealous. She tried to rescue Shade from the Vampyrum Spectrum in South America.

At the end of the book, Chinook asked her to be his mate. She politely declined, instead asking Shade to be her mate, who gladly accepted.

Despite having a major role in Silverwing and Sunwing, Marina has only a minor role in Firewing.

Marina gave birth to a young bat named Griffin. After discovering that Griffin had possessively tried to steal fire, she and other bat mothers tried to help Luna when she was wounded after catching on fire. Unfortunately, Luna died from her injuries. Griffin ended up in the Underworld (alive) and escaped with Luna, who had died. When Griffin returned to his colony, he lived with his mother there for the rest of his life along with Luna. 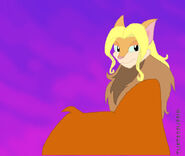 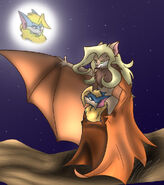 Add a photo to this gallery
Retrieved from "https://silverwing.fandom.com/wiki/Marina_Brightwing?oldid=6973"
Community content is available under CC-BY-SA unless otherwise noted.