Start a Wiki
Brutus is the vengeful, war-mongering supreme commander of the owls. Brutus serves as one of the antagonists of the TV series.

Brutus ordered the attack on Tree Haven after Frieda refused to give up Shade. Obsessed with war and hunting fugitives, he is always certain about his decisions and does not like to be advised by anyone. Not even his son, whom he is ashamed of for not sharing his views on the law. 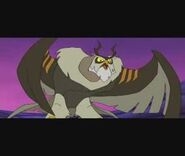 Add a photo to this gallery
Retrieved from "https://silverwing.fandom.com/wiki/Brutus?oldid=6984"
Community content is available under CC-BY-SA unless otherwise noted.